Rare migrant. Also birds escaped from captivity are seen now and then.
Four county records on the Irish Rare Birds Committe database:
1996 Rostellan, a female from the 27th to the 30th October.
1995 Curraghlicky Lake, Drinagh, one from the 21st to the 22nd 1995.
No Date The Lough 1 female early November (Irish Birds 5:85)
1927 Reendonogan Lake, near Bantry Bay, a male shot on the 29th December.
Distribution: A widespread but patchily distributed breeder in west-central and
southern Europe. 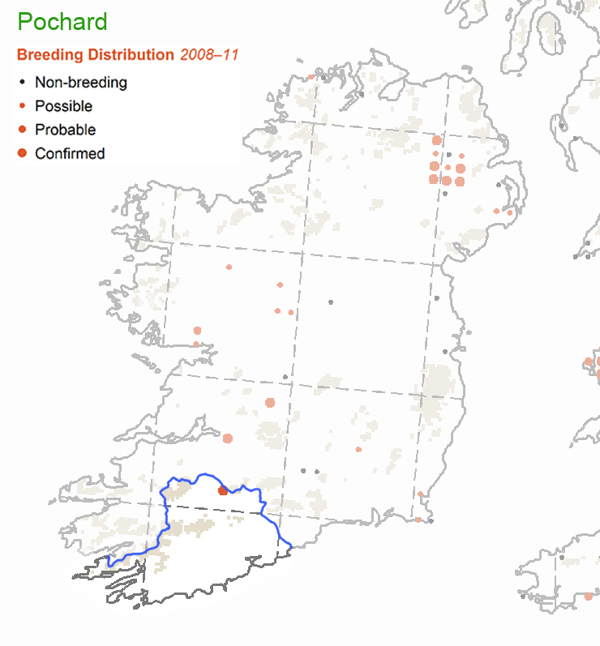 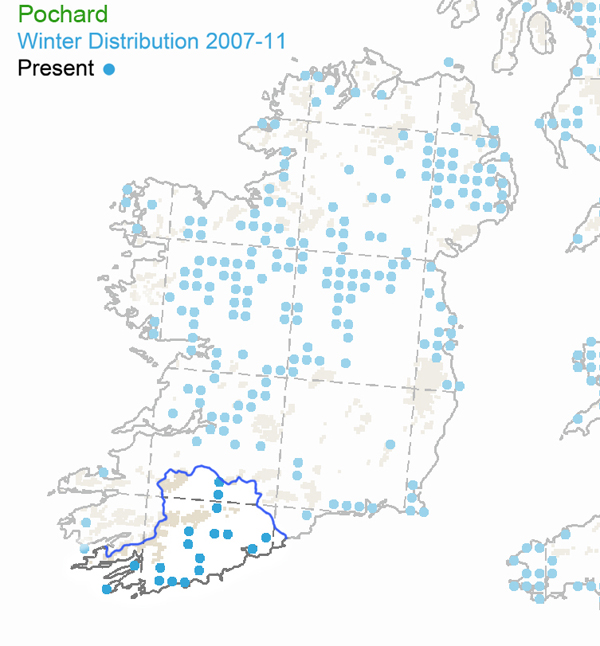 Rare migrant.
Five county records up to the end of 2014. Most records are presumed to refer to the same bird returning to Kilcolman NNR from 1991 to spring 1999. The records from autumn 1999 and summer 2001 probably refer to new birds.
2001 Kilcolman NNR, an adult male on the 1st May.
1998 Kilcolman NNR, one male between the 8th and 28th March.
1994 Castlelack Lake, one adult male from the 11th December until the 2nd March 1995.
1992 Charleville Lagoons, one male from the 29th February until the 8th March.
1991 Kilcolman NNR, one adult male from the 20th January until the 14th February.
Distribution: breeds principally in south-western Asia (east to China and south to Pakistan and India), central and eastern Europe, and north Africa9. The wintering range overlaps with the breeding range and extends to the Middle East, north-east and West Africa (mainly Mali and Nigeria9) and South-East Asia. (Birdlife International) 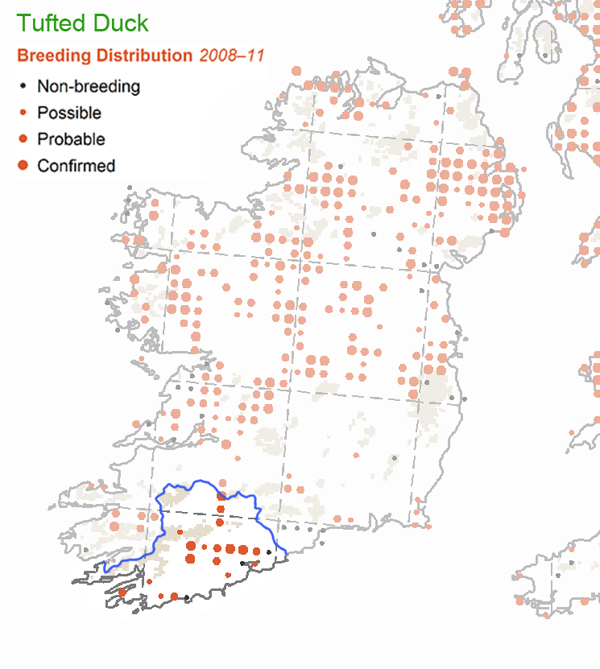 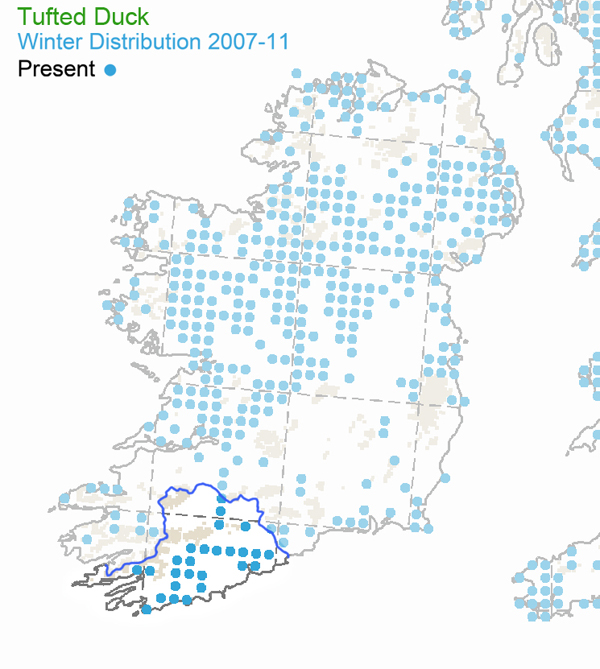 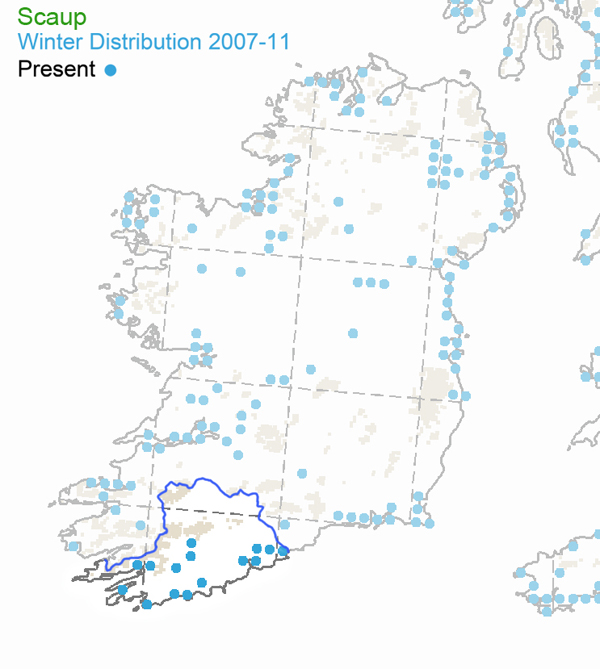 Rare vagrant.
One county record up to the end of 2014. (Awaiting further information about a few other sightings.)
2004 Dunisky, Lee Reservoir, first-winter male, 4th to 25th January. First county record.
Distribution: Breeds throughout much of the interior of Alaska and Canada, south to California, Nevada, South Dakota and Minnesota in the United States. The northern limit of its breeding range is the open boreal forest and forest tundra of Alaska, Yukon and the Canadian Northwest Territories. A migratory species, the lesser scaup winters mainly along the Louisiana and Florida Gulf Coasts, as well as on Lake Okeechobee in Florida and along the Pacific and Gulf Coasts of Mexico. (Arkive) 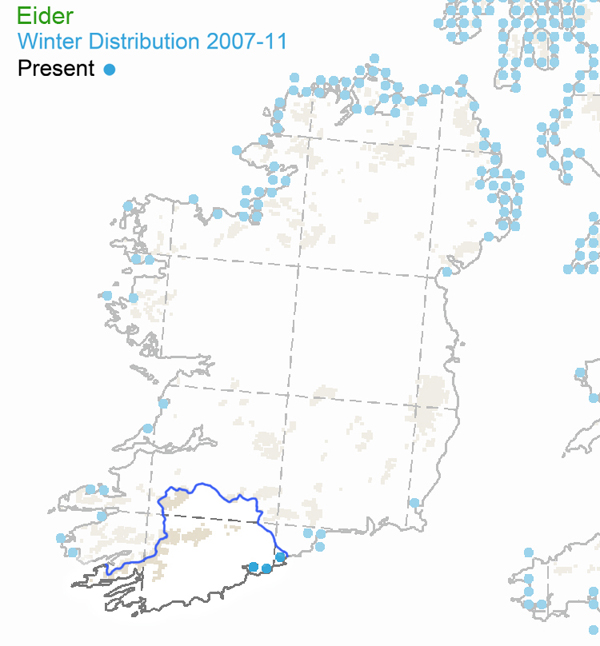 Rare vagrant
Two county records.
2014 A female at Cahermore, from the 19th January to the 9th March.
1959 A male at Baltimore from the 29th January to 24th February.
Distribution: Breeds along the northern hemisphere Arctic coasts of Europe, North America and Asia. It can be found further south during the winter, including the north-east and north-west coast of North America, on Iceland and islands north of the United Kingdom, and on the Pacific coast of Asia to the tip of the Kamchatka Peninsula (Russia). (Birdlife International)

Very scarce winter visitor, with most seen at coastal locations. Records of this species have become less frequent in recent years. 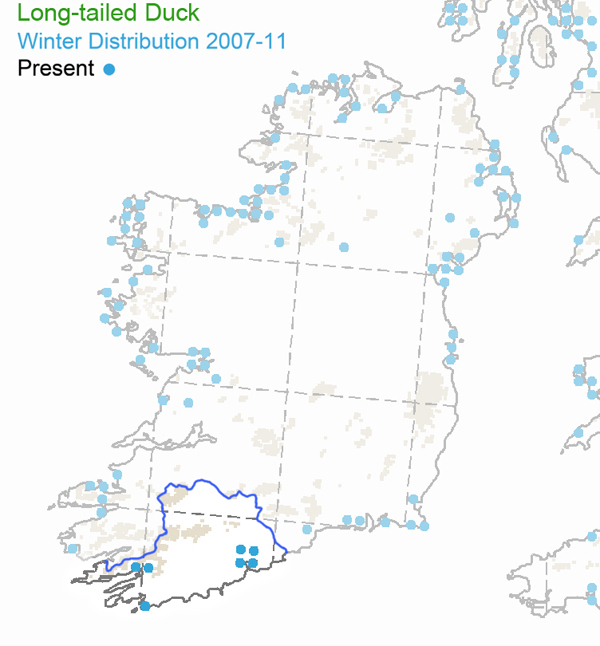 Distribution: Circumpolar, breeding on the Arctic coasts of North America (Canada, Alaska, USA and Greenland), Europe (Iceland and Norway), and Asia (Russia). It winters at sea further south, as far as the United Kingdom, South Carolina and Washington in the United States, Korea on the Asian Pacific coast, and other areas including the Black Sea and Caspian Sea1. According to monitoring data from the Baltic Sea, where the western Siberian and northern European populations winter, the population there decreased by up to 70% between 1995 and 2009. (Birdlife International)

Small groups are regular on passage at sea in late summer and autumn. Scarce in winter. 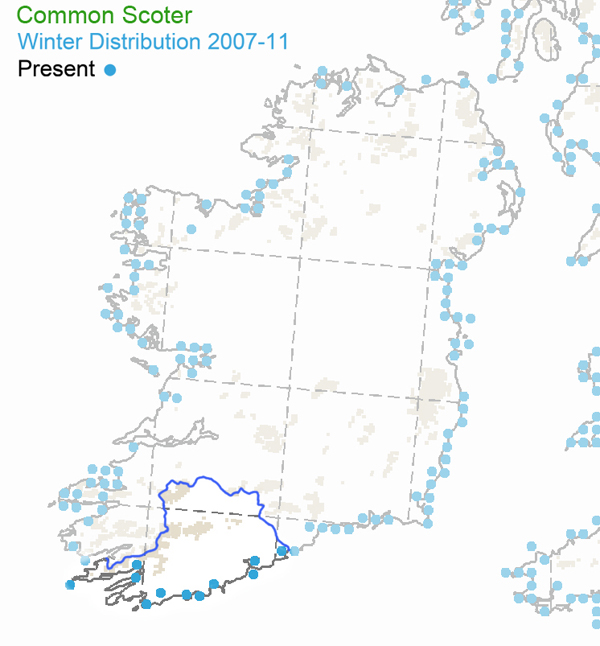 Rare vagrant, mostly in winter.
30 records up to the end of 2014. The first county record was in 1888 at Crookhaven Bay when an immature was shot on the 5th November.
2014 Two records of single birds, Courtmacsherry (see 2013 record) and a male at Garretstown on 27th September.
2013 Six records of single birds all during the winter months except one at Courtmacsherry which stayed until April 2014.
2012 Four records of single birds during the winter months from Garretstown, Schull, Ballybranagan and Toe Head.
2010 Great Island, 1st Yr Male, 5th December to 30th January 2011.
2007 Carrigrenan Point (Little Island), a 1st-winter female from the 27th January to the 13th February.
2002 Saleen, a juvenile on the 17th November.
1999 Old Head of Kinsale, a first-year male from the 14th February to the 4th April.
1998 Aghada, a female/immature from the 8th to the 22nd November.
1998 Saleen/Aghada, a first-winter female from the 1st to the 22nd November.
1996 Inch Bay, a first-winter from the 3rd November to the 1st December.
1993 Cape Clear Island, an adult male on the 15th April.
1991 Broad Strand, a returning adult female from the 28th October to the 13th April 1992.
1990 Broad Strand, a returning adult female from 18th November into 1991.
1989 Broad Strand, a female from 26th December to 8th April 1990.
1985 Cape Clear Island, a female/immature on the 9th October.
1983 Ballybrannagan Strand, a male from the 12th December into 1984.
1982 Ballycotton, a female form the 3rd to the 17th October.
1976 Clonakilty Bay, an adult females and an immature from the 17th November to the 13th February 1977.
1976 Clonakilty Bay, an immature from the 23rd October to the 13th February 1977.
1969 Toormore Bay, one on the 12th January.
1888 Crookhaven Bay, an immature shot on the 5th November.
Distribution: Can be found in North America, breeding inland from western Alaska (USA) through central Canada to Labrador, and wintering from the Aleutian Islands down to Baja California (Mexico) on the Pacific coast, and along the Atlantic coast of the USA as far south as South Carolina. (Birdlife International)

Occasional winter visitor.
50 birds recorded in the county up to 2004.
17 county records involving 25 individuals up to the end of 1986 when the species was removed from the IRBC rarities list.
Analysis of these records show the following:
Birds were seen at the following locations: Ballycotton, Ballydehob Estuary, Cape Clear Island, Castletownshend Harbour,
Clonakilty, Dunmanus Bay, Galley Head, Garretstown, Glandore Harbour, Glengarriff, Old Head of Kinsale, Youghal.
Records involved between one and three birds usually seen on one day but a few have stayed for over a month.
All were seen between September and March.
Distribution: Breeds in Fennoscandia and northern Russia (with a disjunct
population in the Caucasus), which together account for less than a quarter of its
global breeding range.

Rare vagrant.
One county record.
1998 The Gearagh, female, 18th January to 8th March. First Irish record.
The common occurrence of this species in wildfowl collections clouds its status, but on the basis of the record below the species has now been admitted to Category ‘A’ of the Irish List.
Distribution: Breeds in northern North America and winters on the coast and in the south of North America. 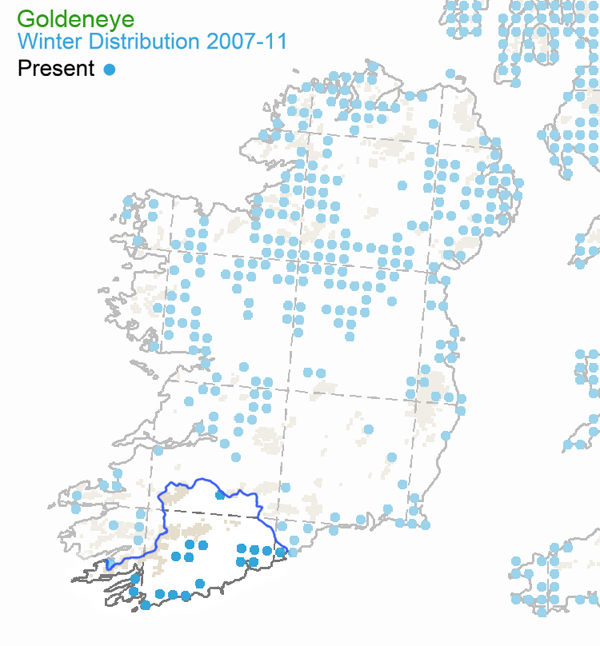 Rare vagrant.
One county record.
A male and female were shot in Cork Harbour in December 1878. This is the first Irish record.
Distribution: Breeds in eastern and western North America, wintering further south on each coast.

Rare in recent years, though previously almost annual in winter.
13 records involving 13 birds up to the end of 1999 when the species was removed from the IRBC rarities list.
Analysis of these records show the following:
Birds were seen at the following locations: Castlelack lake, Cobh, Douglas Estuary, Enniskeen, Kilcolman NNR, Kilkerran Lake, River Lee (near Macroom), The Gearagh.
All were single birds and mosrt were females or immatures. All were seen between October and March.
Distribution: breeds mainly in northern Russia and Fennoscandia, with Europe
accounting for less than a quarter of its global breeding range.

Common in winter on the coast. Rare in summer. Rare breeder in west Cork. 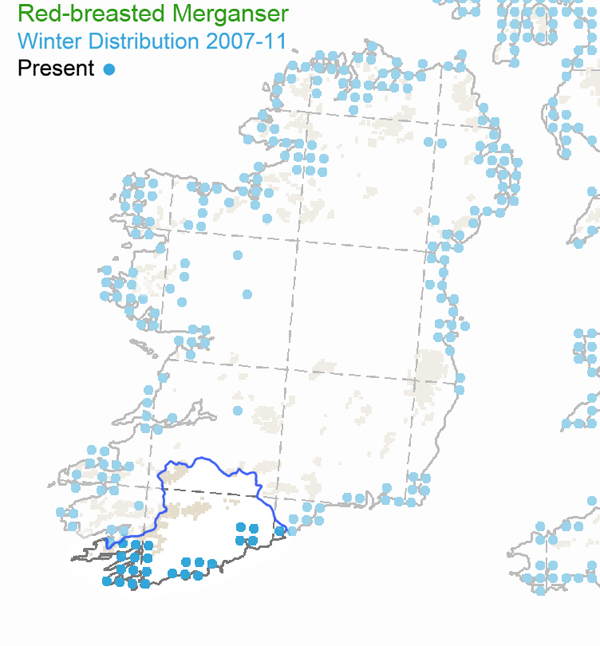 Rare winter visitor.
Regular in 19th century; 29 birds seen between 1959 and 2006.
Nine county records up to the end of 1999 when the species was removed from the IRBC rarities list.
Analysis of these records show the following:
Locations where birds have been seen: Ahakista, Lee reservoirs, Rossleague, Dripsey/Inniscarra Reservoirs, Cape Clear Island, Lough Allua, The Gearagh, Cape Clear Island, Sherkin Island, Ballydonegan.
Birds were seen in February, March, October and December.
Distribution: Can be found breeding year-round in central Asia and western China, in northern Europe including France, Germany, Scandinavia, the United Kingdom and Iceland, and in large areas of northern United States and parts of southern Canada. Summer breeding grounds include the majority of Scandinavia and Russia, parts of central Asia including northern India, northern regions of Kazakhstan, Mongolia and Japan, and much of southern Canada. Wintering grounds expand the range further south to encompass most of the United States, other coastal regions of south-eastern Europe (e.g. Turkey and Greece) and central Asia, and the eastern coast of China as well as Korea and Japan. (Birdlife International)

Very scarce but virtually annual winter visitor, most records from inland sites. All considered to be from feral populations.
51 birds recorded in the county up to 2010.
Distribution: This species has a large, discontinuous range in the Americas, occurring in Canada, the USA, Mexico, the West Indies, and along the Andes from Colombia to Tierra del Fuego (Chile). An introduced population is established and spreading in the United Kingdom.