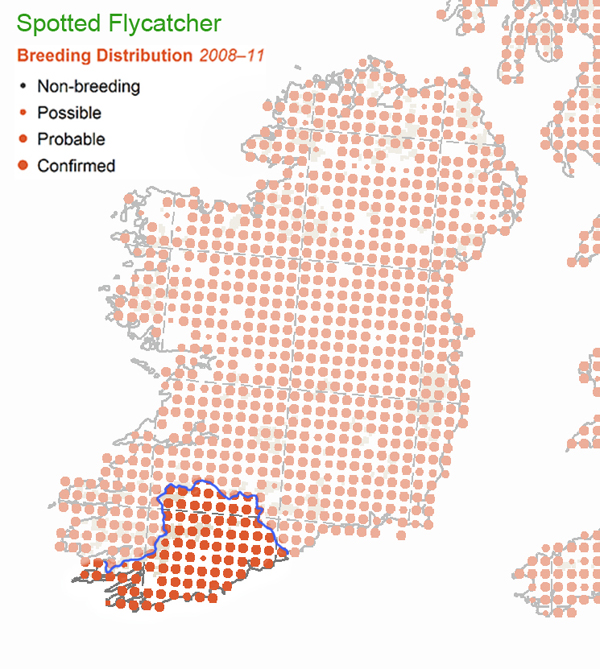 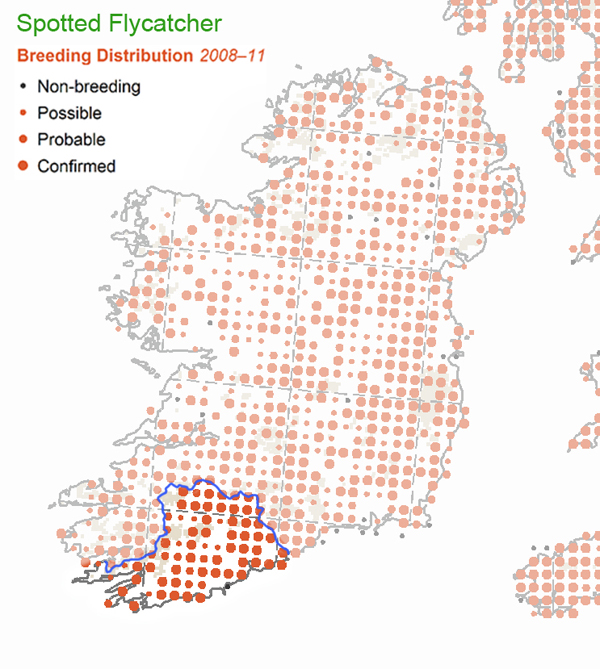 Occasional though almost annual vagrant, virtually all records in autumn.
160 county records involving 175 birds up to 2012.
Birds have been seen at the following locations: Ballinacarraige, Ballycotton, Ballymacrown (near Baltimore), Barley Cove,
Bull Rock, Cape Clear Island (majority of the records), Crookhaven, Dursey Island, Firkeel, Galley Head, Garinish, Knockadoon Head, Lissagriffin, Mizen Head, Old Head of Kinsale, Sherkin Island Three Castles, Toe Head.
Ususally seen singly but up to three have been seen in a day. Where age was given almost all were 1st winter birds.
Apart from one in December and two in April and August all birds were seen in September and October. Most were only seen for a day.
Distribution: The red-breasted flycatcher breeds in north-western, central and eastern Europe eastwards to south-west Siberia, Turkey, the Caucasus and northern Iran. It winters mainly in Pakistan and north, west and central India, and irregularly in the southern Caspian region, Afghanistan, Sinai and the Arabian Peninsula. It is a regular autumn migrant in small numbers to western Europe and very occasionally north-east Africa. (Birdlife International)

Uncommon passage migrant, mostly in autumn, very scarce in spring.
Distribution: a widespread summer visitor to much of Europe (occurring
more patchily in the south and west), with the region constituting >75% of its global
breeding range. Does not currently breed in Ireland.