Rare vagrant.
Three county records, all of the taiga race, involving 33 birds upto the end of 2013.
1984 One at Ballymacoda on 28th April.
1982 27 at Ballintotis, near Midleton, on from the 5th to the 28th January.
1981 Two at Ballymacoda from the 25th of October, joined by three more on 21st December and all stayed in 1982. These were the first county records.
Distribution: breeds in Fennoscandia and northern Russia, and winters patchily in
western, central and south-east Europe, which probably holds >50% of its global
wintering population. (Birdlife International)

2006 An adult at Kilcolman National Nature reserve from the 3rd to the 5th March is the only county record of this race.

Rare winter visitor.
Six records involving 17 birds up to the end of 1985 when the species was removed from the IRBC rarities list.
21 county records up to 2006, involving 62 birds.
All records during that period in the greater Ballycotton area of east Cork.
Distribution: breeds only in Svalbard, Iceland and east Greenland, with the
entire global breeding range hence confined to Europe.(Birdlife International)

Four county records involving 11 birds upto the end of 2013, all since 1981
Distribution: breeds in Greenland and arctic Russia, with Europe accounting for
less than a quarter of its global breeding range. (Birdlife International)

Wild birds are probably best considered as scarce winter visitors, but the lack of submitted sightings may in part be due to the mobile flocks of feral birds in the region. Formerly bred in Ireland. Only feral birds now breeding here. 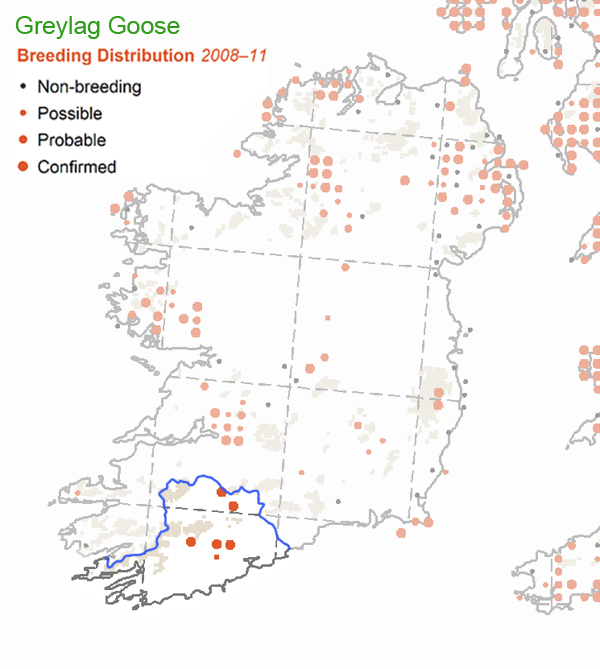 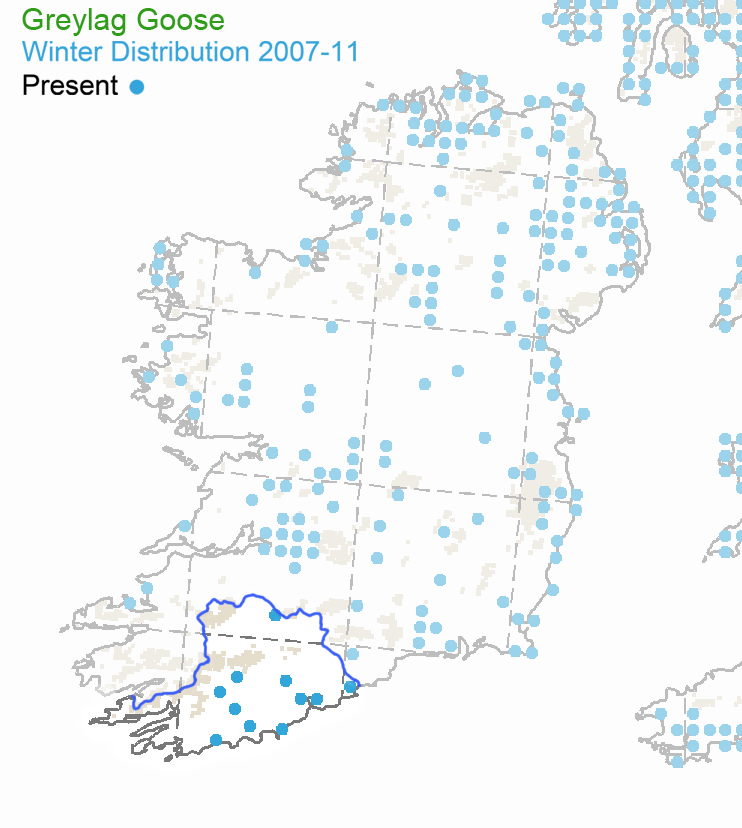 Distribution: True wild birds have a widespread but patchily distributed breeder across much of Europe,
which accounts for less than half of its global breeding range. (Birdlife International)

Feral populations, especially those from The Lough, are very mobile, and cloud the status of true wild individuals.
One record of a wild bird.
1985 Lissagriffin, one from the 31st March to the 7th April. The race involved was Branta canadensis minima.

Scarce winter visitor, with most records being of birds flying over coastal locations during the late autumn arrival period. Wintering birds are scarce.
Distribution: has an entirely European distribution, breeding mainly in the far
north, and wintering in north-west Europe. (Birdlife International)

Since the early 1990’s this species has become more regular in the county and is now commonly seen in winter at a number of locations. It remains unusual away from the east Cork strongholds.

All records refer to the pale-bellied form (B. b. hrota), which breed mainly in Arctic Canada, unless otherwise stated. The race ‘bernicla’ is an occasional visitor. There is one record of ‘Black Brant’ (B. b. nigricans) in Whitegate and Great Island on a number of dates between 6th December 2009 and 5th April 2011.