Very scarce passage migrant, chiefly in autumn, occasional in spring.
115 county records involving 183 individual up to the end of 1993 when the species was removed from the IRBC rarities list.
Analysis of these records showed the following:
Birds were seen at the following locations:6km off Seven Heads, Ballycotton, Ballymacoda, Bantry Bay, c14 km S of Sherkin Island, Cape Clear Island (most records), Crosshaven, Dunkettle, Dursey Island, Galley Head, Garnish Point, Mizen Head, Old Head of Kinsale, Red Strand, Galley Head, Rosscarbery, Sherkin Island.
Where age was given adults and immatures were seen in roughly equal numbers.
Most records were of single birds or small groups. Highest count one day count was 8 at Cape Clear on the 15th July 1992 and 8 at Old head of Kinsale ar on the 19th July 1992.
All birds seen between July and October with most records in September.
Distribution: breeds in the arctic and has a circumpolar distribution through northernmost North America and Eurasia. It migrates south during the autumn, wintering in the cold waters of the Humboldt current off the coast of Peru and Ecuador and off the south-west coast of Africa in the cold waters of the Benguela Current. (Birdlife International) 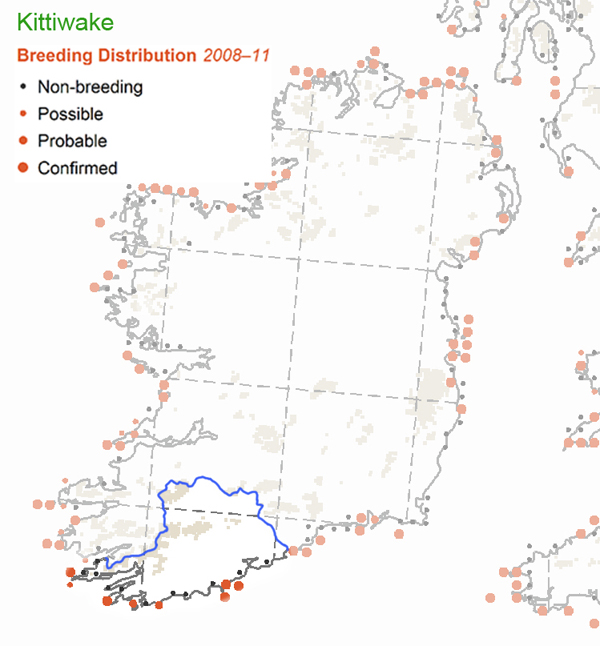 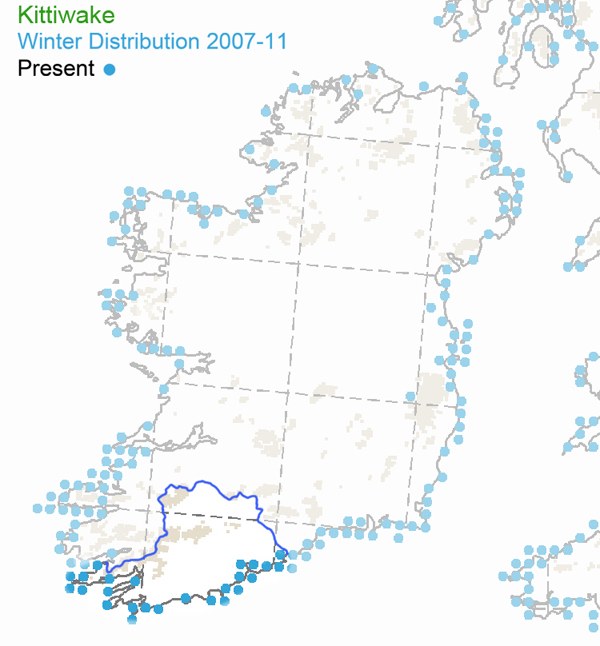 Common and widespread in winter, scarcer in summer. Breeds in small numbers, chiefly at inland sites. 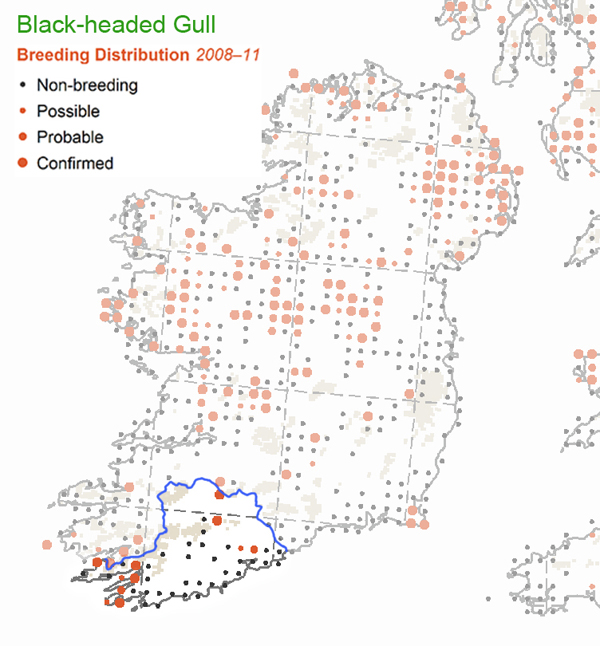 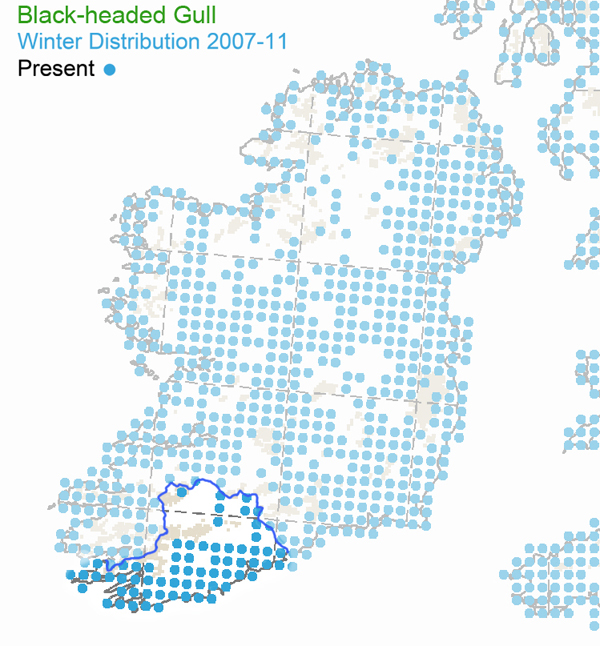 Uncommon passage migrant and scarce winter visitor, with most records in the autumn. Occasional records during the summer months.
Distribution: The Little Gull can be found breeding in northern Scandinavia, the Baltic republics and western Russia to western Siberia, in eastern Siberia, and in the Great Lakes of North America. Its distribution expands in winter to include most of the Mediterranean, Black Sea and Caspian Sea coastlines, as well as the Atlantic coast of Europe and the north-west coast of the USA. (Birdlife International)

Rare vagrant.
Three county records upto the end of 2014.
2014 Kinsale, adult, 9th February to 9th March.
1995 Cape Clear Island, adult, 24th February.
1985 Cobh, first-winter, 24th February.
Distribution: Ross’s Gull breeds in the high Arctic of North America and Siberia. It is found in north-east Siberia, Russia, from the Taymyr Peninsula to the Kolyma River, locally in Greenland (to Denmark) and irregularly in Canada. Its wintering range in Siberia expands further west and east down to the tip of the Kamchatkan Peninsula, with other wintering sites including the north coast of Alaska (USA) and the south-eastern coast of Greenland. (Birdlife International)

This species is now probably best considered as an uncommon winter visitor to the county. 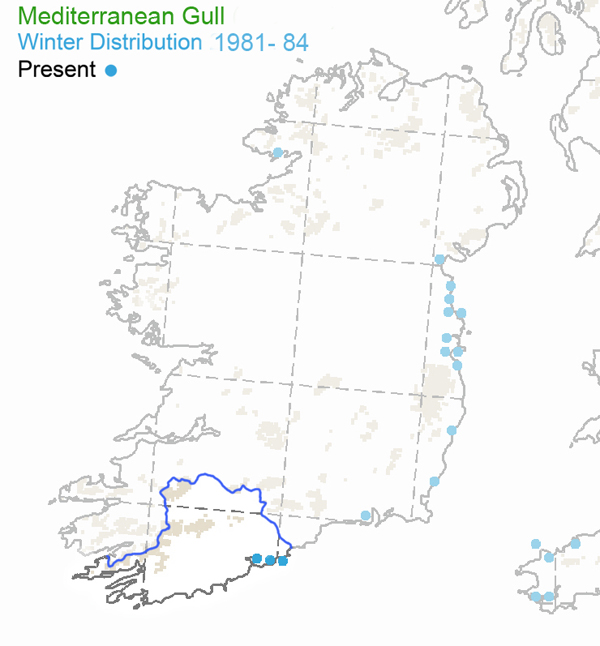 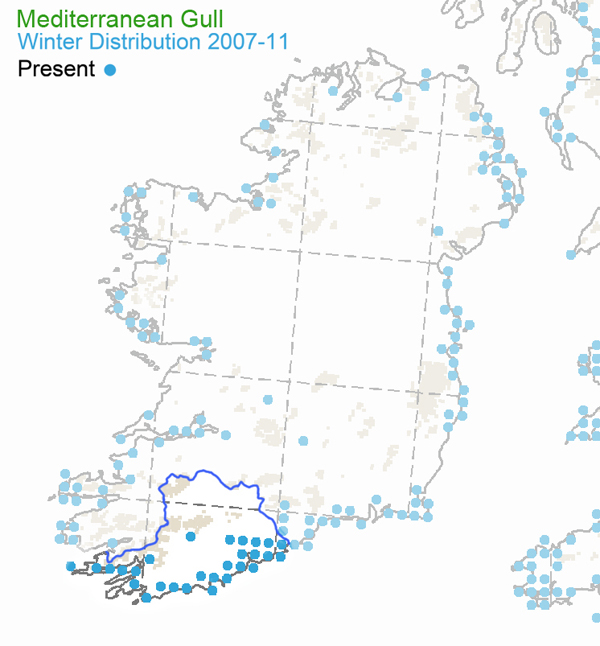 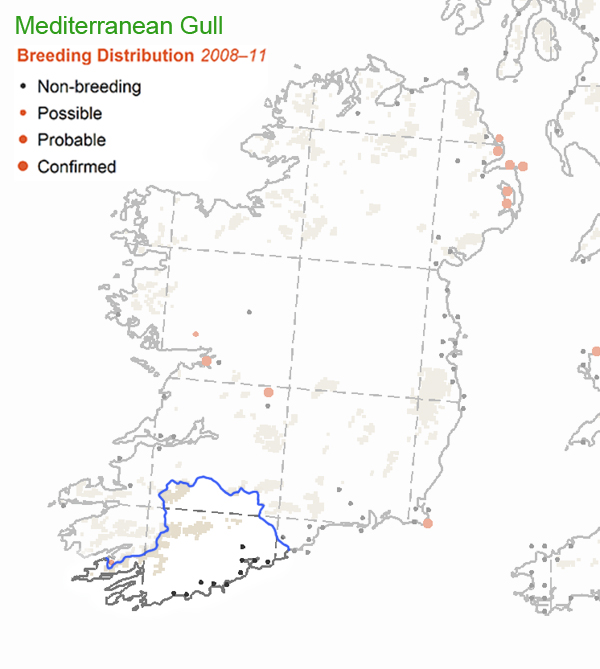 The first county record was one at Old head of Kinsale on the 5th October 1964 and there were only five records up to 1980.Up until the species was removed from the IRBC rarities list at the end of 1985 there were only 35 county records.
Small numbers can be found at most coastal sites from autumn to spring, and very small numbers of chiefly immature birds remain throughout the summer. Highest counts are always from the Cork Harbour area, mainly Whitegate and Cobh where counts regularly reach double figures, especially in the autumn and winter.
Breeding status is uncertain, but it has bred previously, and the increasing presence of fresh juveniles in late summer may indicate local breeding continues.

Common and widespread in winter, scarcer in summer, often seen at inland sites. Small numbers breed in the west. 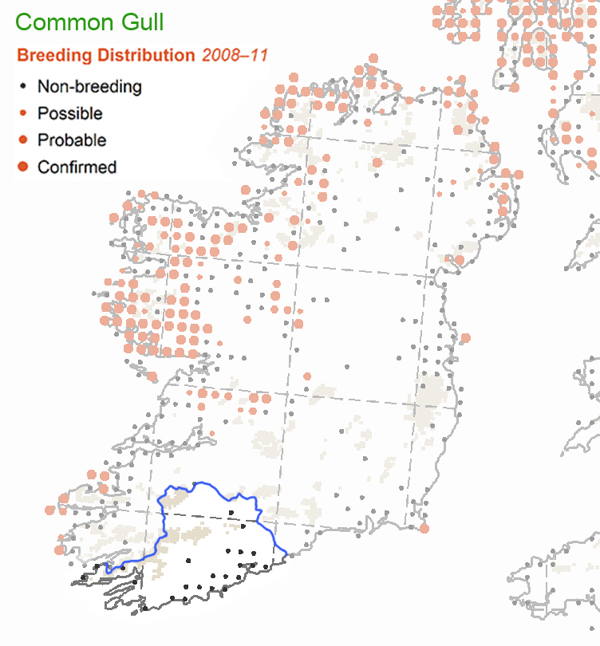 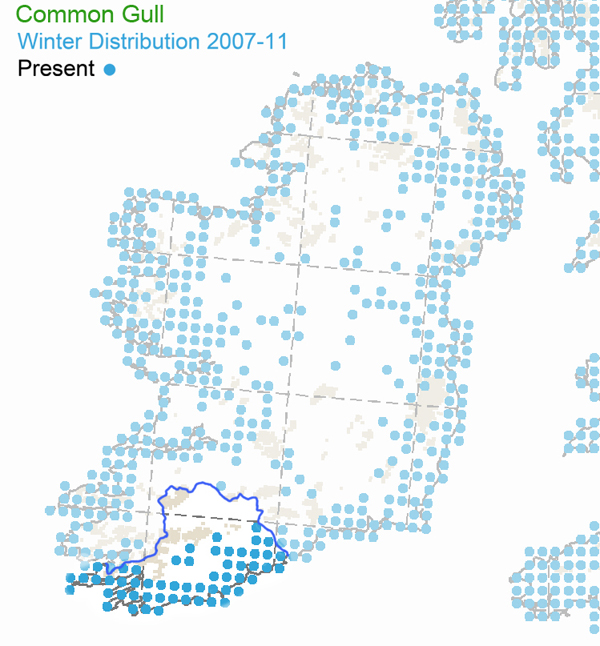 This previously rare vagrant is now best considered a scarce annual visitor. Mostly encountered in autumn and winter, but can be found at any time of year. Potentially breeding in the county or nearby, though this not yet proven.First county record was in 1981. 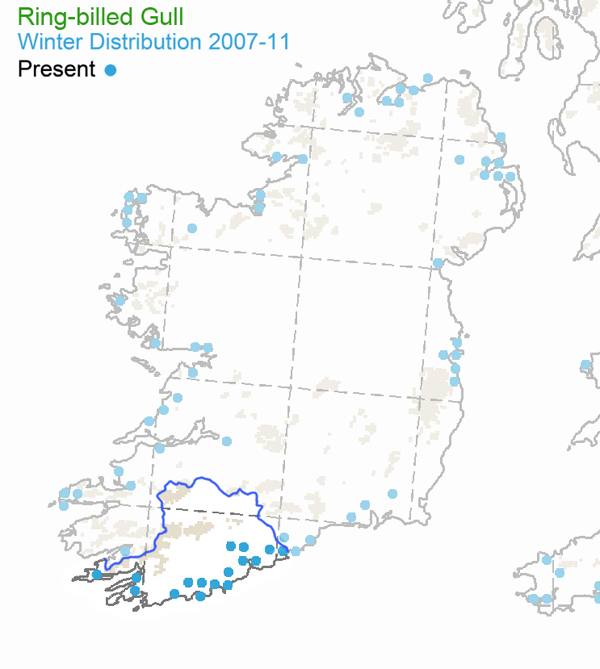 84 records involving 112 birds up to the end of 1993 when the species was removed form the IRBC rarities list.
Analysis of these records show:
Birds were seen at the following locatoins: Adrigole, Ballycotton, Ballymacoda, Blackrock, Broad Strand,
Cape Clear Island, Clonakilty, Cobh, Coolmain (Courtmacsharry Bay), Courtmacsharry Bay, Douglas Estuary, Dunkettle, Kinsale, Little Island, Rosscarbery, Rossleague (Great Island), The Lough (Cork City), Timoleague, Whitegate Bay.
Normally seen singly with the highest count of five at The Lough, Cork City, during the winter of 1989/90. About 50% were adults and interstingly almost all adults were seen between January and September.
Recorded in all months except June with most birds seen during the winter months.
Distribution: The Ring-billed Gull breeds in the USA and Canada from in north California, east Washington and interior British Columbia, across the praire provinces, north mountains and plain states. Also from the Great Lakes east to the coast. It winters in the southern portion of its breeding range south to the Gulf Coast, Mexico, Central America, Greater and Lesser Antilles. (Birdlife International)

Common and widespread on the coast. 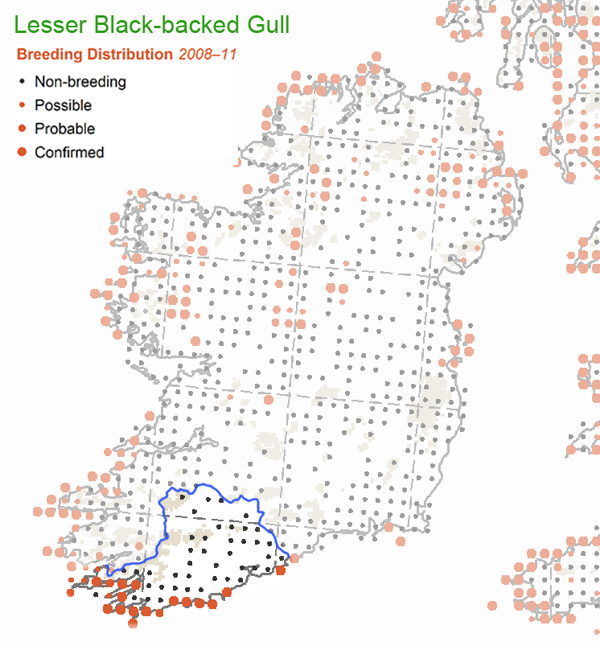 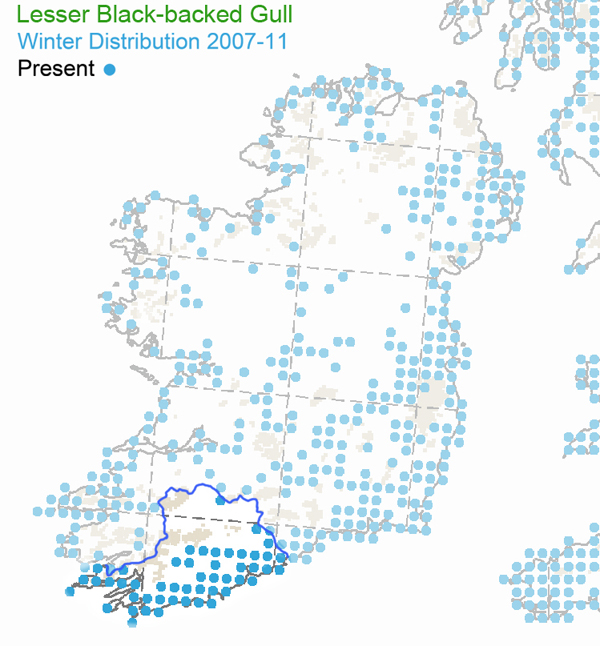 Breeds commonly at many coastal sites, with a bias towards the south-west.
Races other than L.fuscus are rare vagrants.

Common all year, with highest numbers in winter. Breeds in most coastal areas, chiefly in the west. Formerly our commonest large gull species and seen in large numbers in winter, this species is suffering an alarmingly rapid decline in numbers on both a county and national level. 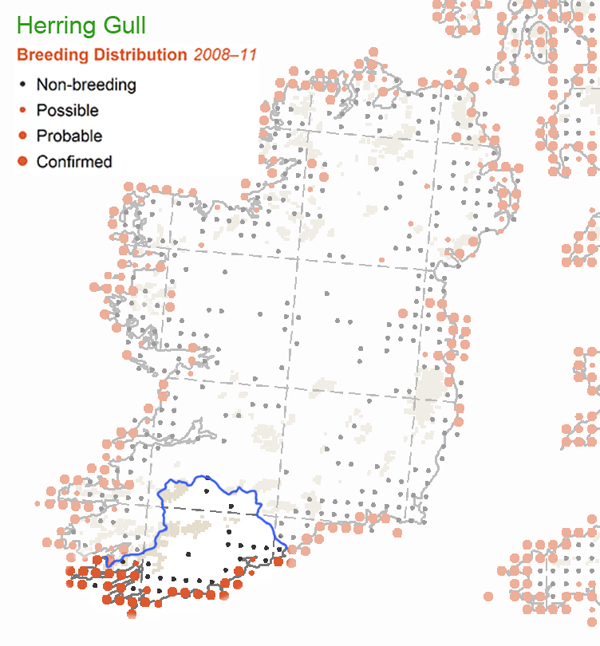 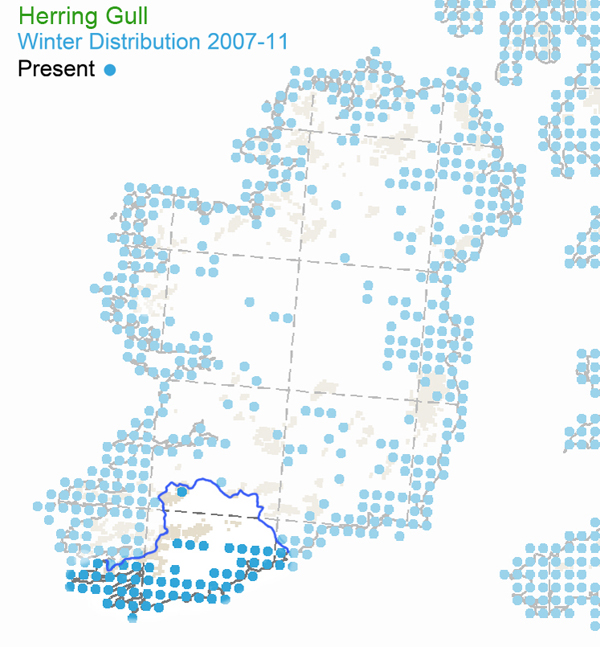 The northern race ‘L.a.argentatus’ is an occasional winter visitor.

Occasional migrant and winter visitor, also a few seen in late summer.
Annual in small numbers in recent years, no more than two or three in the county per year.
15 county records up to the end of 1999 when the species was removed from the IRBC rarities list.
Analysis of these records show the following:
Birds were seen at the following locations: Ballycotton, Cape Clear Island, Clonakilty, Cork City Dump, Courtmacsherry Bay, Rosscarbery, The Lough (Cork City).
Where the age of the bird was given there was one 2nd Summer, three 3rd Winter, one 4th Winter and the rest adults.Most records involve birds seen on one day only and birds have been seen in all months of the year except between March and June.
The Atlantic race ‘L. michahellis atlantis’ : 2012 Sub-adult, Rosscarbery/Owenahincha, 13th August to 9th September. 3rd Year, Ring, Clonakilty, 26th August, Muckross (Clonakilty) 9th to 17th September.
Distribution: can be found in Europe, the Middle East and north Africa. It is resident in much of southern Europe, on the coasts of the Mediterranean, Black Sea and Caspian Sea, on the Azores and Madeira, Portugal, and on the Canary Islands. Spain. Wintering grounds include the coast of south-west Asia (breeders from the steppes), most of the European coast up to Denmark and the coast of Africa from Western Sahara through tho the eastern Mediterranean. (Birdlife International)

Rare vagrant.
One county record up to 2014.
2007 1st Winter, Youghal Refuse Tip, 24th February to 6th March.
Distribution: can be found in eastern Europe, the Middle East, north-west Africa and central Asia. It is resident in much of the Black Sea and Caspian Sea. It also seasonally breeds from the Black Sea, across the north of the Caspian Sea to eastern Kazakhstan, and on the central Asian steppes. Wintering grounds include the coast of south-west Asia (breeders from the steppes), the north-west coast of Africa, and around the Arabian Peninsula up to north-west India. (Birdlife International)

Rare vagrant.
Seen most years since first recorded in 1986, occasionally with multiple records in a year. Difficulties with identification of adults and near-adults cloud the species status. The regular presence of first winters indicates fresh arrivals each year.
The first county and Irish record was in Cobh in November/December 1986.
Since then up to the end of 2014 there has been 33 records involving 33 birds.
Birds seen at the following locations: Ballycotton, Bantry, Baltimore, Castletownbere, Clonakilty, Cobh, Cork City Dump, Old Head of Kinsale, Red Strand (Galley Head), The Lough (Cork City), Youghal refuse tip.
Recorded in all months except June, July and August with most records in the winter months. 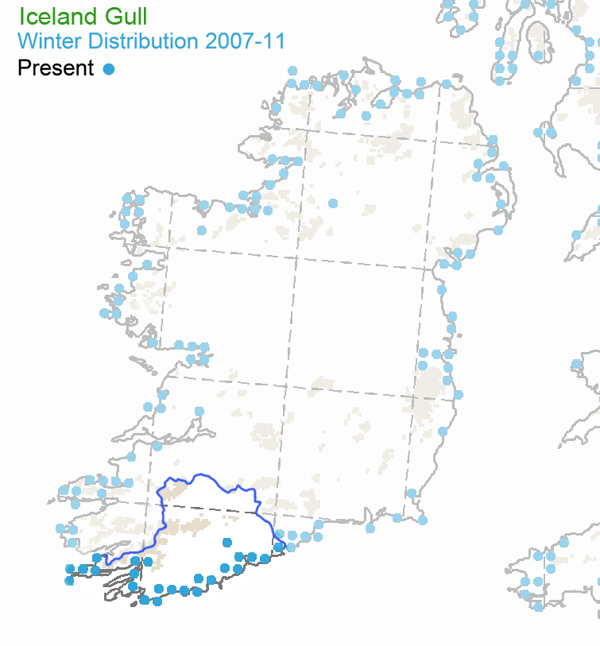 Distribution:The Iceland Gull breeds in the Arctic regions of Canada and Greenland (to Denmark), and outside the breeding season can be found wintering in the northernmost states of the eastern USA as far inland as the great lakes, on Iceland, Ireland, the United Kingdom, the north coast of Norway, the southern tip of Scandinavia and the northern tip of Germany. (Birdlife International)

Rare vagrant.
One county record upto the end of 2014. This is the first Irish and Western Palearctic records of this species.
1990 A juvenile/first-winter, The Lough, Cork City Dump and Cobh, 21st February to 5th March.
Distribution: Thayer’s Gull is native to North America, breeding on Arctic islands Canada and wintering on the Pacific coast from south-east Alaska (USA) to north Baja California (Mexico). (Birdlife International) 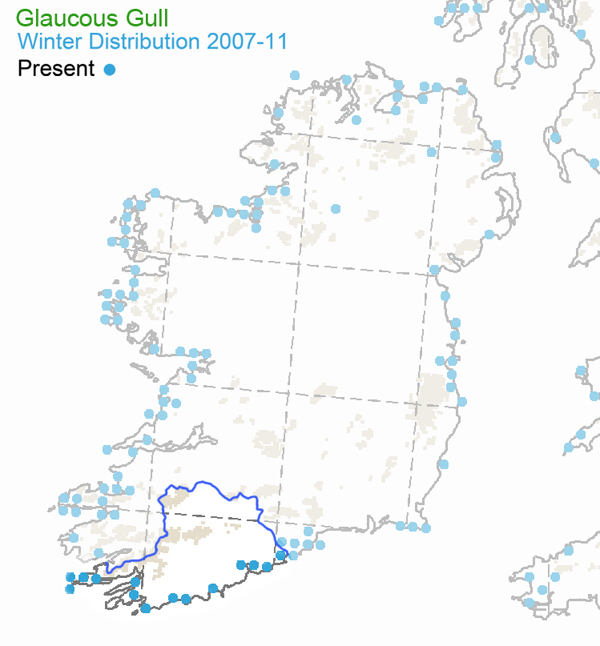 Distribution: This species breeds in the Arctic regions of the northern hemisphere. Birds breeding in northern Europe and Asia tend to remain near the colony year-round. Breeders in North America migrate south, being found in the North Pacific from California (USA) round to the extreme south-east of Russia, off the western coast of North America down to Virginia, and the Atlantic coast of Europe down to Brittany, France including the United Kingdom and Ireland. (Birdlife International)

Widespread and common throughout the year, with highest counts in winter. Breeds at low density at many coastal sites. 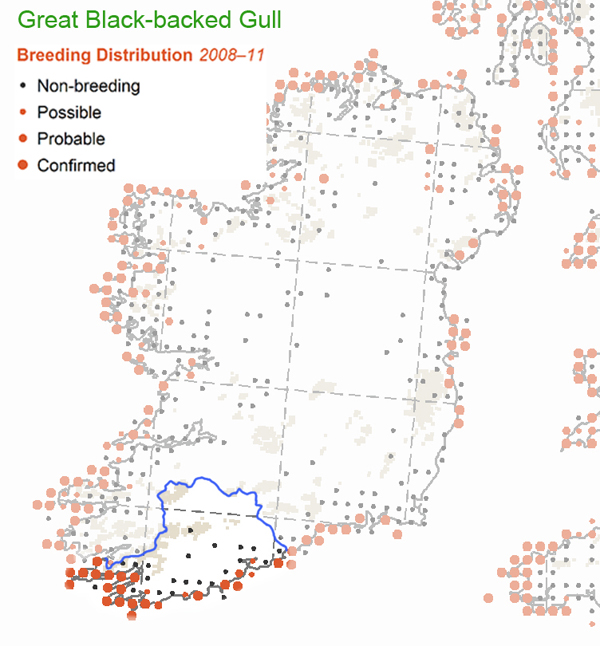 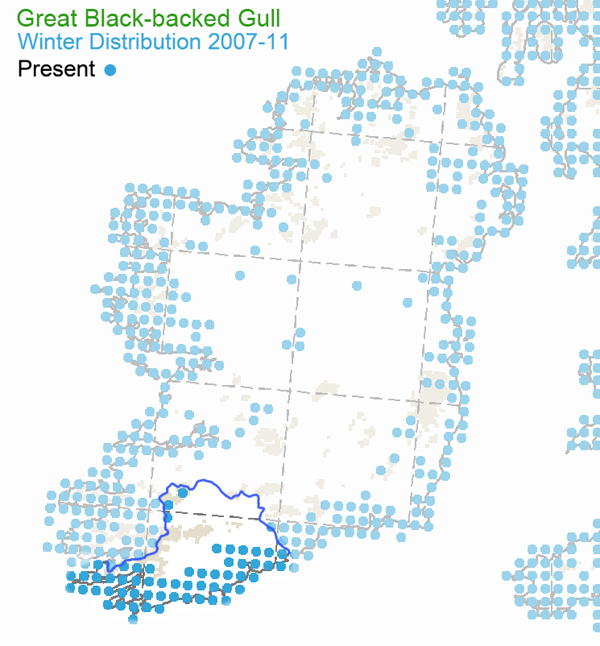