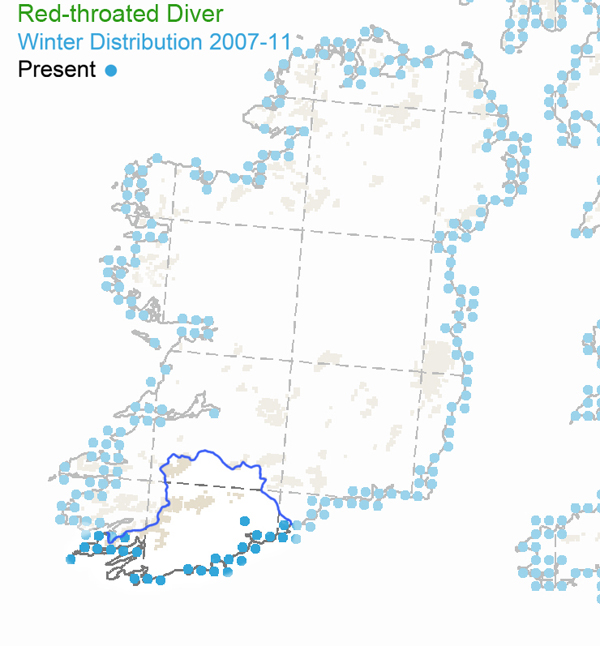 Very scarce winter visitor.
51 records involving 81 birds up to 1999 when it was removed from the IRBC rarities list, since the first record on Cape Clear on the 15th April1962.
Analysis of these records show the following:
Birds have been recorded at the following locations: Adrigole, Aghada, Ahakista, Ballybranagan Bay, Ballycotton, Ballymacoda. Bantry Bay, Between Galley Head and Rosscarbery, Broadstrand, Cape Clear Island. Castletownberehaven, Clonakilty Bay, Cobh, Courtmacsharry Bay, Galley Head, Garinish Pier. Garryvoe, Inchydoney, Knockadoon Head, Old Head of Kinsale, Oysterhaven, Reendonegan Lake, Roaringwater Bay, Rosscarbery, Rostellan, Schull Harbour, The Lough (Cork City), Toormore Bay.
Usually seen in ones or twos with the highest cout of eight between Galley Head and Rosscarbery from the end of January to mid March 1976.
Most records between December and April with a few between the end of September and the end of November. Just one summer record, a long staying bird at Cape Clear in 1982 between the 12th April and 2nd July.
Distribution: a widespread breeder across much of northern Europe, which accounts for less than a quarter of its global breeding range. (Birdlife International)

Widespread on the coast from late autumn to spring, though usually in small numbers. Some higher numbers in spring before and during migration. Rare inland.

Distribution: breeds in much of Canada and Alaska, parts of northern United States, southern parts of Greenland (to Denmark) and in Iceland. It winters on sea coasts or on larger lakes over a much wider area including the Antlantic coast of Europe from Finland to Portugal and the western Mediterranean, the Atlantic coast of North America down to northern Mexico, and the Pacific coast of North America from northern Mexico to the tip of Alaska (USA). (Birdlife International)

Rare vagrant
Three county records upto the end of 2013.
2006 One, Clear Island, 27th October to 2nd November.
2004 One, Clear Island, 31st May.
1974 One, Lough Hyne, 3rd February. This is the first Irish Record.
Distribution: breeds in the Arctic in Russia, Alaska (USA), and Canada , and winters at sea mainly off the coasts of Norway, western North America, and the eastern coast of Asia, including the coasts of Japan, North Korea, South Korea, and China1,7. The population is thought to number 16,000-32,000 individuals, with 3,000-4,000 in Alaska, 20,000 in Canada and 8,000 in Russia7. The breeding range in Russia has possibly contracted. (Birdlife International)