Three county records of unidentified albatross up to the end of 2020.

Global Distribution: Usually found in the southern hemisphere In the South Atlantic the principal breeding islands are: the Falkland Islands, South Georgia and the South Sandwich Islands.

A widespread breeding species. Can be seen any time of the the year but especially in autumn and winter.

Apart from two records in the 19th century, all records from the 20th/21st century with numbers increasing quickly and first breeding confirmed in the county in the 1930s.
Sightings of the dark northern variants (‘Blue’ Fulmar) are rare.

Global Distribution: This species is found breeding throughout the north Atlantic and north Pacific, ranging from Japan and the United Kingdom in the south, to the high Arctic in the north. Northern populations are migratory, travelling south as the sea freezes over. Southern populations are more dispersive, but do not usually reach zones of warm water. Young birds may undertake transoceanic crossings and general wander further than the less mobile adults (del Hoyo et al. 1992). (Source: BirdLife International.) 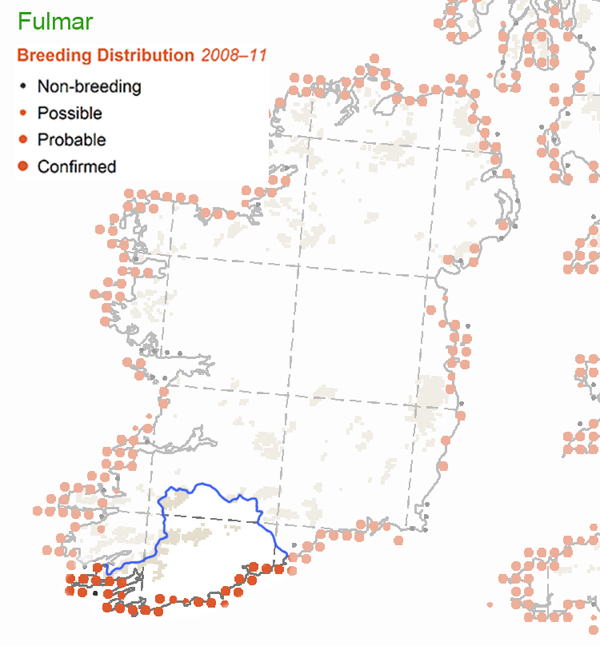 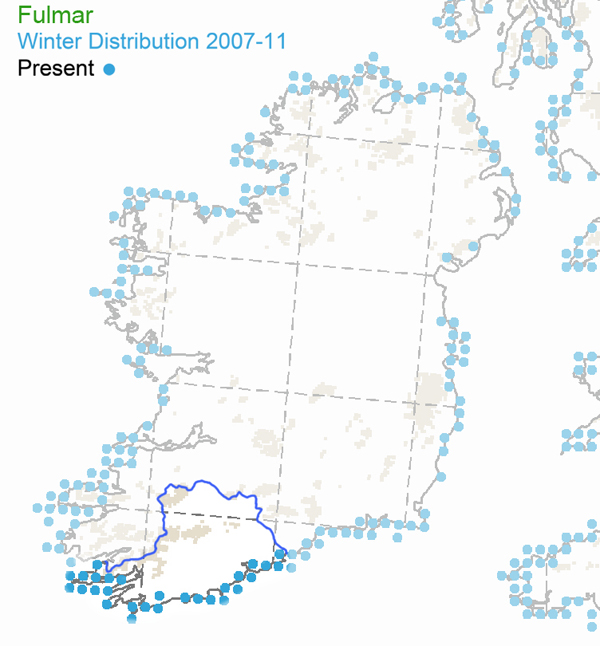 70 records, all single birds, except five, three and two on single dates up to the end of 2020.
Since the first Irish record in 1974, this species has now become a rare but annual vagrant in the county
All records between July and October with most in August. The first county record in 1974 was also the first for Europe.

Global Distribution: Fea’s petrel occurs in the northeast Atlantic, breeding on four of the Cape Verde Islands (Fogo, Santo Antão, São Nicolau and Santiago), and on the island of Bugio in the Desertas Islands, off Madeira. Zino’s Petrel breeds in the central mountain massif of Madeira, Portugal, though subfossil remains elsewhere in Madeira and on the neighbouring island of Porto Santo (Zino and Zino 1986, Zino et al. 2001) suggest that it was formerly more widespread.. Desertas Petrel breeds on Bugio in the Desertas off Madeira, Portugal. Based on surveys in 2006-2007, 120-150 pairs were estimated to breed on Bugio (a lower figure than estimates from 2001 of 150-180 pairs), but the population appears to be stable (Ramirez 2008). (Birdlife International)

A bird seen in 1975 Off Cape Clear Island, 3rd August was originally accepted as a first county and Irish record, but has since been removed form the Irish list due to lack of enough evidence of positive identification.

Global Distribution: Bulwer’s Petrel is pantropical, being found in all three oceans outside the breeding season. Breeding sites include the eastern Atlantic from the Azores, Portugal to Cape Verde, and the Pacific from eastern China and the Bonin Islands (Japan), east to the Hawaiian Islands (USA), and the Marquesas Islands (French Polynesia).

223 records involving 19,407 individuals between the first county record at Cape Clear in 1962 and the end of 1998 when the species was removed from the IRBC rarities list.
Analysis of these records show the following:
Birds have been seen at the following locations: Cape Clear Island (Majority of the records), Dursey Island, East of Bull Rock, Galley Head, Mizen Head, near Marathon Gas Platform (off Cork Harbour), Old Head of Kinsale, Sherkin Island. Largest single day total: 10,939 at Cape Clear on the 16th August 1980. 16 of the 223 records account for 93% of the birds seen.
Birds have been seen between April and October with most recorded during August.

Global Distribution: Cory’s Shearwater breeds on islands and cliffs in the Mediterranean, as well as having outposts in the Atlantic at the Canary Islands (Spain), Berlengas Islands and the Azores (Portugal). After breeding, birds from the Atlantic colonies predominantly winter off the coast of South America and southern Africa, with some individuals from the Mediterranean wintering in the area of the Canary current. (Birdlife International)

Global Distribution: This species breeds at three main sites: Nightingale and Inaccessible islands in the Tristan da Cunha group, and Gough Island, Tristan da Cunha (to UK) (Snow and Perrins 1998, Carboneras 1992d). Birds also breed in small numbers in the Falkland Islands (Malvinas), where the only confirmed site is Kidney Island (no more than 15 pairs recorded in 1987 (Woods 1988)), though there is a slight possibility of breeding near Wineglass Hill, East Falkland, where one has been caught (Woods and Woods 1997). (Birdlife International)

Variable in numbers though generally common passage migrant from late summer through autumn.

Over a thousand in a day have been recorded on a few occasions.

Global Distribution: It is an abundant shearwater, breeding on islands off New Zealand, Australia and Chile, and the Falkland Islands (Malvinas). (Birdlife International)

Common offshore from late spring to autumn. Largest numbers recorded in late July and early August with thousands flying west per hour of headlands.
Usually scarce from early October, and rare though recently almost annual in winter. Not known to breed in the county but large numbers breed in Kerry.

Global Distribution: This species breeds in the north Atlantic, with major colonies on the Atlantic coasts of the United Kingdom and Ireland. Colonies are also present on Iceland, islets off Massachusetts (U.S.A.) and Newfoundland (Canada), as well as on the Azores, Portugal and the Canary Islands, Spain. It undergoes trans equatorial migration, expanding the range in winter to include the Atlantic coast of South America below the equator and the south-west coast of South Africa. (Source: BirdLife International)

Uncommon offshore passage migrant in late summer and autumn.
206 records involving 283 birds up to the end of 1985 when the species was taken off the IRBC rarity list. Usually recorded singly or in very small numbers.

Global Distribution: Breeds in the Balearic Islands, Spain. In winter, it occurs in the Balearic Sea and off the north-east Spanish coast with most of the population traditionally concentrated between Valencia and Catalonia from November to February, however in winter 2007/2008 significant numbers (with a peak count of 710 birds) remained off the coast of Brittany (France), perhaps in response to unusual sea surface temperatures. Some birds migrate north in summer to seas off the Ireland and Britain and the south of the Scandinavian Peninsula. (Birdlife International)

Global Distribution: The Barolo (Little) Shearwater is found throughout the oceans of the Southern Hemisphere south of the Tropic of Capricorn, with the exception of the south-east coast of South America. It is also found of the north-west coast of Africa, breeding on Cape Verde, the Azores, Portugal and the Canary Islands, Spain. (Birdlife International)

Previously considered a rare vagrant, it would appear that this species be better considered an under recorded occasional autumn passage migrant. Reported in most years in the last decade (2000s), mostly from specialised boat trips a few miles offshore, although records from land are increasing.

Apart from four records in July, two in September and one in October, all records were in August.
At Sea: 36 approx 160km SW of Fastnet Rock, 20th September.

Localised breeding species in the county, not confirmed during the 2008-11 breeding survey. Common summer visitor, and passage migrant in autumn.
Counts from headlands of over 1000 per hour is not unusual, usually recorded in August.

Occasional autumn passage migrant.
21 records involving 23 birds up to the end of 1991 when this species was removed from the IRBC rarities list.

Analysis of these records show the following:
Birds have been seen at the following locations: Ballymacoda, Baltimore, Berehaven, Cape Clear Island (majority of the records), Charleville Lagoons, Cork Harbour, Fastnet Lighthouse, Garretstown, Little Island (cork Harbour), Old Head of Kinsale, Roancarrigmore, Roaringwater Bay.
Apart from a single record in May all were seen between July and December.
Since 1991 there have been some more records with exceptional numbers recorded during early December 2005 in Cork harbour when at least 29 were seen and no doubt only a fraction of those along the county coast at the time.

Global Distribution: Leach’s Storm Petrel has an extensive global range. Breeding colonies are confined to the northern hemisphere, from the South Kuril Islands (Japan) round to Baja California (Mexico) including the Aleutian Islands, Alaska (USA) and Canada in the Pacific, and in the north-east North America, Iceland, northern United Kingdom and Norway in the Atlantic. Northern populations migration south into the tropics in winter, reaching the equator in the Pacific and as far south as south Brazil and South Africa in the Atlantic. (Birdlife International)