Global Distribution: A widespread summer visitor to Europe, which constitutes >75% of its global breeding range. Breeds in small numbers in the UK. Also found in Asia. (Birdlife International)

Global Distribution: The black kite is found through most of Africa, Europe and Asia (except for the Sahara, central China and the extreme north) and in parts of Indonesia, New Guinea and Australia. (Birdlife International)

Possibly bred in the 18th century.
11 records involving 12 birds up to 2001 since the first county record at Ballycotton on the 9th November 1968.

Global Distribution: Endemic to the Western Palearctic, with the European population of 19,000-23,000 pairs encompassing 95% of its global breeding range1,17. It breeds from Spain and Portugal east through central Europe to Ukraine, north to southern Sweden, Latvia and the UK (890 pairs20), and south to southern Italy. Populations winter within the western breeding range, and formerly in isolated patches south and east to eastern Turkey. Its status as a breeding and wintering species in North Africa is now uncertain. Also found in Asia. A reintroduction programme is underway in Ireland, based in Wicklow and those birds have coloured wing tags. (Birdlife International)

Global Distribution: The species has its strongholds in Norway and Russia (which together hold >55% of the European population4, and important populations in south-west Greenland (to Denmark), Sweden, Poland and Germany. Smaller numbers breed in Iceland, United Kingdom, Finland, Estonia, Latvia, Lithuania, Belarus, Austria, Czech Republic, Slovakia, Slovenia, the former Yugoslav states, Bulgaria, Romania, Hungary, Moldova, Greece, Turkey, Iran, Armenia, Georgia, Azerbaijan, Ukraine, Kazakhstan, Turkmenistan, Mongolia, mainland China, and Japan. It formerly bred in Algeria and may still do so in Iraq. A reintroduction programme is underway in Ireland, based in Kerry and those birds have coloured wing tags. (Birdlife International)

Global Distribution: A widespread but patchily distributed resident in southern Europe, which accounts for less than half of its global range.
Also found in Africa and Asia. (Birdlife International)

Former resident, recorded breeding in the county in the 19th century (Ussher & Warren:xxvi), now a very scarce annual passage migrant, mostly in spring and summer.
Increasingly regular in summer, raising hopes that the species may breed in the future.

Analysis of these records show the following:
Birds were seen at the following locations: Ballycotton, Ballymacoda, Cape Clear Island. Cuskinny (Cobh), Garretstown, Inchydoney, Kilcolman NNR, Lough Beg, Sherkin Island, Tragumna, Unionhall, Youghal.
All records involved single birds and where age was give almost all were immature/female.
Birds were seen between April and November with May being the best month.

Global Distribution: A widespread breeder across much of Europe, which accounts for less than half of its global breeding range. Also Africa and Asia. (Birdlife International)

Very scarce resident breeding species in the north of the county.

Regular in autumn and winter on the coast. Some evidence of passage migration in the autumn, though this may refer to local movements. 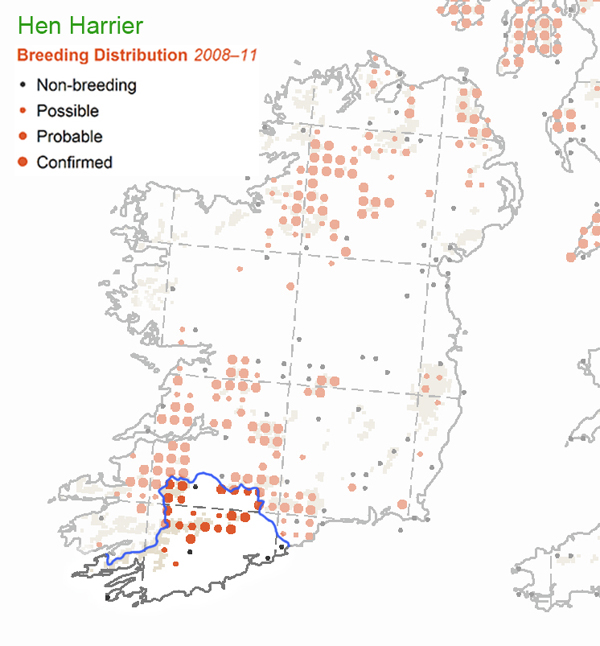 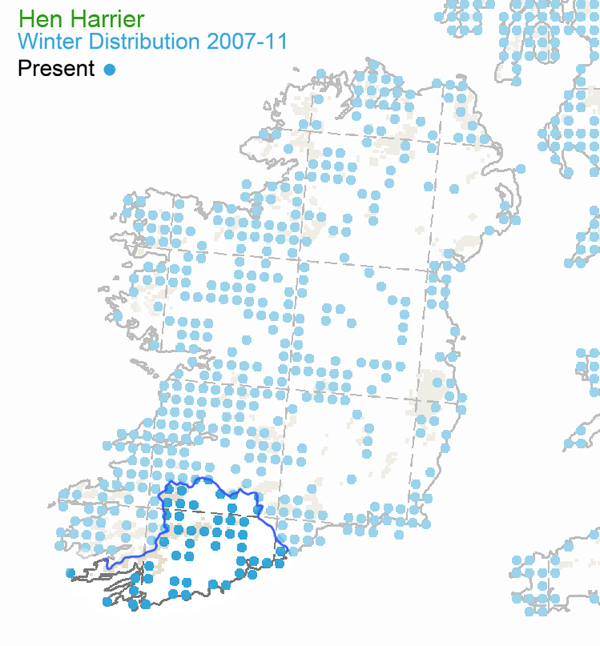 2020  Nohoval, one juvenile, 2nd to the 12th October, is the first county and ninth Irish record.

Global Distribution: It breeds throughout the northern parts of the northern hemisphere in Canada and the northernmost USA.
The northern harrier migrates to more southerly areas in winter, with breeding birds in more northern areas moving to the southernmost USA, Mexico, and Central America. In milder regions in the southern US, they may be present all year, but the higher ground is largely deserted in winter.

Rare vagrant.
Four county records up to the end of 2020.

Global Distribution: Breeds primarily in the steppes of Asiatic Russia, Kazakhstan and north-west China. Small populations breed in Azerbaijan, Romania, Turkey and Ukraine. A minority winter in south-east and central Europe, north Africa and the Middle East but most migrate to the Afrotropics. (Birdlife International)

Global Distribution: a widespread but patchy breeding distribution in Europe, which constitutes >50% of its global breeding range. Also Africa and Asia. (Birdlife International)

Former resident; Occasional records may refer to dispersive movements within the country, or occasional vagrancy.
Status in the north Cork area uncertain, but there are some indications that the species may be breeding in very small numbers.

In 1974 a Goshawk of the American race Accipiter g. atricapillus was seen on Cape Clear Island on the 5th October

Global Distribution: a widespread resident across most of Europe, which accounts for less than half of its global range. Also found in Africa, Asia and North America. (Birdlife International) 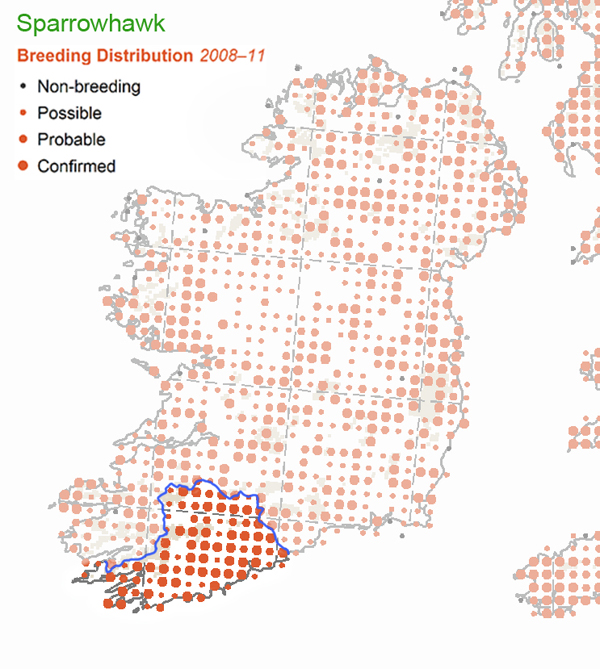 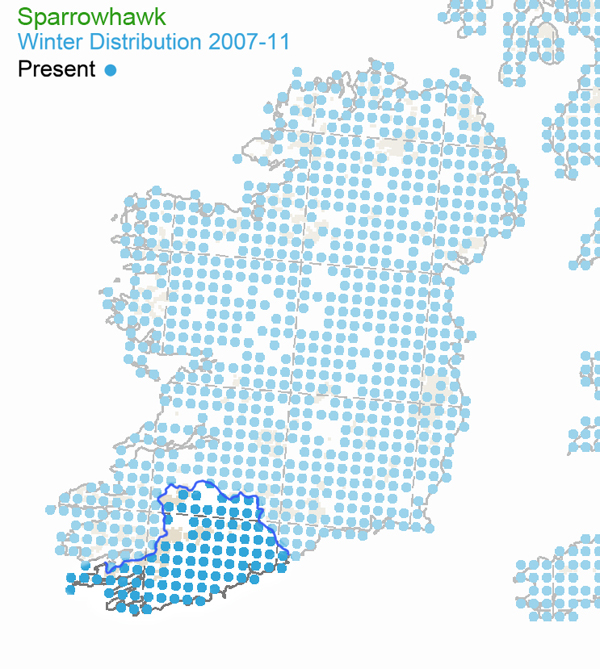 Previously rare, this species is continuing its recolonisation of the county since it became extinct as a breeding species due to human persecution
by the end of the 19th century and is now a common sight in the skies over the county.

Only 13 county records up to 1993 when the species was removed from the IRBC rarities list. Since then sightings have gradually increased and breeding was first proven in 2004. There was a minimum of 78 pairs breeding in the county in 2011-2012 (Nagle et al, Irish Birds Vol. 10 No.1, 2014)

A study of the diet of Common Buzzards in the county (2011-2012) showed that Brown Rat, Jackdaw, Magpie, Rabbit and Rook made up 84% of their diet. 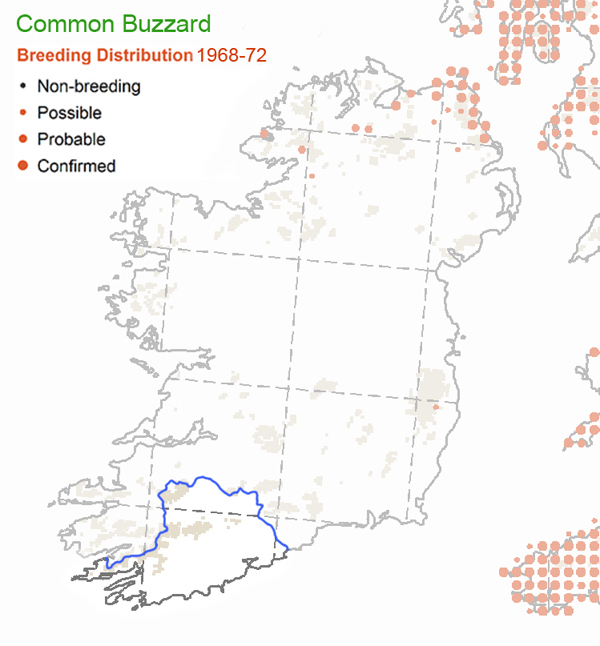 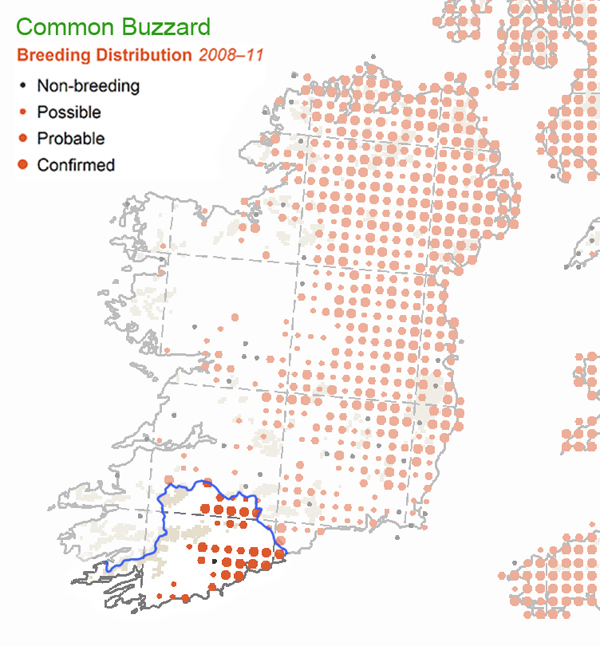 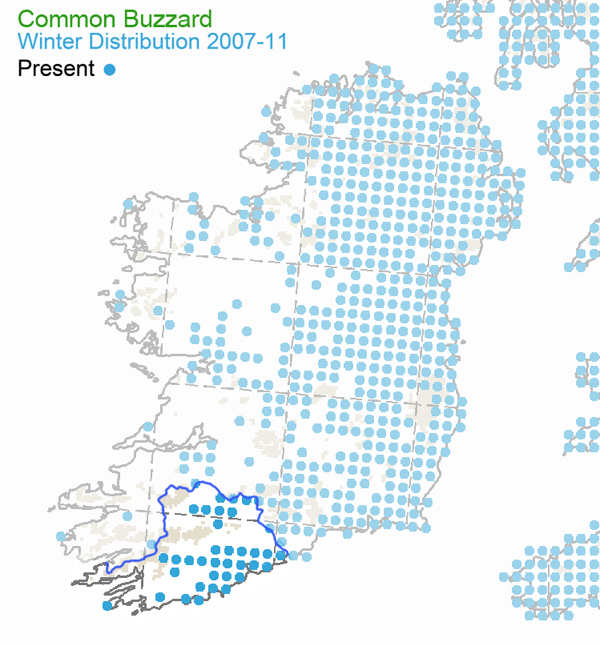 Rare Vagrant.
Three county records up to the end of 2020.

Global Distribution: a widespread breeder in Fennoscandia and northern Russia, with Europe accounting for less than a quarter of its global breeding range. Also North America. (Birdlife International)

1845 Near Youghal, two of the nominate race, both shot in January after being present for several weeks, one immature now at National Museum, Dublin. R. Dairs, jun., Annals & Magazine of Natural History 16: 351. This was the first Irish record.

A Irish Golden Eagle reintroduction programme started in Ireland in the 1990s in Donegal and birds from this programme have been seen across the country.

Global Distribution: a widespread but discontinuous distribution across much of Europe, which accounts for less than a quarter of its global breeding range. A reintroduction programme is underway in Ireland, based in Donegal and those birds have coloured wing tags. Also Africa, Asia and North America. (Birdlife International)

Scarce passage migrant, mostly in spring and autumn.
40 county records involving 38 individuals up to the end of 1999 when the species was removed from the IRBC rarities list.

All records were of single birds. and birds have been seen all months except January, February, July and December.

Global Distribution: a widespread summer visitor to much of northern Europe (occurring only patchily farther south), which accounts for less than a quarter of its global breeding range. Breeds in the UK. Also Africa, Asia, Australia and North America. (Birdlife International)