Very scarce passage migrant. Not known to breed in the county, although it has done so in the past.

Global Distribution: This species is breeding through much of Europe, scattered along the coast and inland in parts of Africa, in much of western, central and the extreme east and south of Asia, and in northern parts of Australasia. Migratory individuals expand the range to include most of the coast of Africa, the Arabian Peninsula, the western coast of India and most of the waters of south-east Asia and Australasia, including New Zealand. One seasonally breeding colony is also present on Hawaii (del Hoyo et al. 1996). (Source: BirdLife International)

Global Distribution: The Gull-billed tern breeds in warmer parts of the world in southern Europe, very small isolated population in northern Germany and Denmark, temperate and eastern Asia, both coasts of central and southern North America, the north-west and eastern coasts of South America and Australia. Post-breeding dispersal expands its range to include much of south Asia, Central America, New Zealand and parts of central Africa. (Birdlife International)

Global Distribution: A cosmopolitan but scattered distribution. Their breeding habitat is large lakes and ocean coasts in North America (including the Great Lakes), and locally in Europe (mainly around the Baltic Sea and Black Sea), Asia, Africa, and Australasia (Australia and New Zealand). North American birds migrate to southern coasts, the West Indies and northernmost South America. European and Asian birds winter in the Old World tropics. African and Australasian birds are resident or disperse over short distances. (Birdlife International)

Global Distribution: A widespread but patchily distributed summer visitor to southern and eastern Europe, which accounts for less than half of its global breeding range. Also found in Africa, southern Asia and Australia.(Birdlife International)

Global Distribution: Found in the Old and New World. It ranges from southern Scandinavia to southern Spain, east through Europe and western Asia to central Mongolia. Individuals from this area predominately winter on the Atlantic coast of Africa, from the Western Sahara to South Africa. It is also found across much of Canada to northern regions of the USA, with individuals wintering on the Pacific coast of Mexico, the Pacific and Atlantic coast of Central America and northern South America. (Birdlife International)

Global Distribution: A widespread summer visitor to eastern Europe, which accounts for less than a quarter of its global breeding range. Also found in Asia, Australia and New Zealand. (Birdlife International)

Common passage migrant and summer visitor. Rare in winter. Has bred in the past, no recent breeding records up to the end of 2020.

Global Distribution: This species can be found in Europe, Africa, western Asia, and the Americas. It breeds seasonally on the coast of much of Europe east to the Caspian Sea, wintering from the Caspian, Black and Mediterranean Seas to the coasts of western and southern Africa, and from the south Red Sea to north-west India and Sri Lanka. In the Americas, it breeds from Virginia to Texas (U.S.A.), on the coasts of the Yucatan Peninsula, Lesser Antilles, Venezuela, French Guiana, eastern Brazil and Argentina. It winters from Texas (U.S.A.) down to southern Argentina, the Greater Antilles and from southern Mexico down to northern Chile (del Hoyo et al. 1996). (Source: BirdLife International). 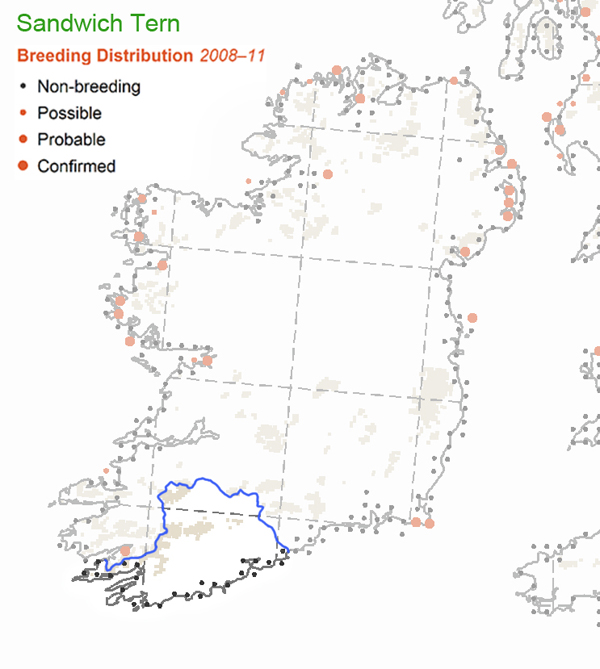 2009 Clonakilty, an adult, 7th June. This bird may have been of the African form S.m.albidorsalis

Global Distribution: The Royal Tern is found in the Americas and the Atlantic coast of Africa. In Africa is breed from Mauritania to Guinea, ranging in winter from Morocco to Namibia. In the Americas it breeds from southern California (USA) to Sinaloa (Mexico), from Maryland to Texas (USA), through the West Indies to the Guianas and possibly Brazil, on the Yucatan Peninsula, in south Brazil, Uruguay and north Patagonia (Argentina). It winters from Washington (USA) south to Peru on the western coast, and from Texas to south Brazil on the eastern side (del Hoyo et al. 1996). (Source: BirdLife International).

1996 Ballycotton, adult, 7th to 8th August; possibly same as one seen in the Isles of Scilly around this time. This is the first Irish record of this species.

Global Distribution: Breeds in subtropical coastal parts of the world mainly from the Red Sea across the Indian Ocean to the western Pacific, and Australia, with a significant population on the southern coast of the Mediterranean on two islands off the coast of Libya. Outside the breeding season it ranges on the north African coast (both Mediterranean and Atlantic), on much of the Indian Ocean nearby continents, and in the western Pacific north of Australia up to New Guinea and Vietnam. (Birdlife International)

2013 Garretstown, one on the 14th December.
2007 Pilmore Strand an adult from the 28th January to the 9th February(Presumed returning individual.)
2006 Ballycotton, one first-winter from 11th to 18th February (also seen near Youghal see below).
2006 Ballyvergan, near Youghal, a first-winter from the 29th January to the 28th February (considered to be the Ballycotton individual)
2006 Pilmore Strand, an adult on the 12th March. (Same bird as in Ballycotton/Ballyvergan/Dungarvan)

Global Distribution: can be found in North and Central America, breeding seasonally in southern Canada and northern USA, wintering in south-east and coastal south-western USA, along the eastern and western coast of Mexico and in Central America. It can also be found year-round on the Atlantic coast of the USA from Virginia to Texas. (Birdlife International)

Global Distribution: This species has a circumpolar distribution and can be found breeding in most of Europe, Asia and North America, except the in the extreme north. It winters further south, being found along the coast and inland of South America down to the Falkland Islands (Islas Malvinas), along the coast of Africa (excluding northern Africa), along parts of the Arabian Peninsula, the coast of India and throughout much of south-east Asia and Australasia, excluding New Zealand (del Hoyo et al. 1996). (Source: BirdLife International) 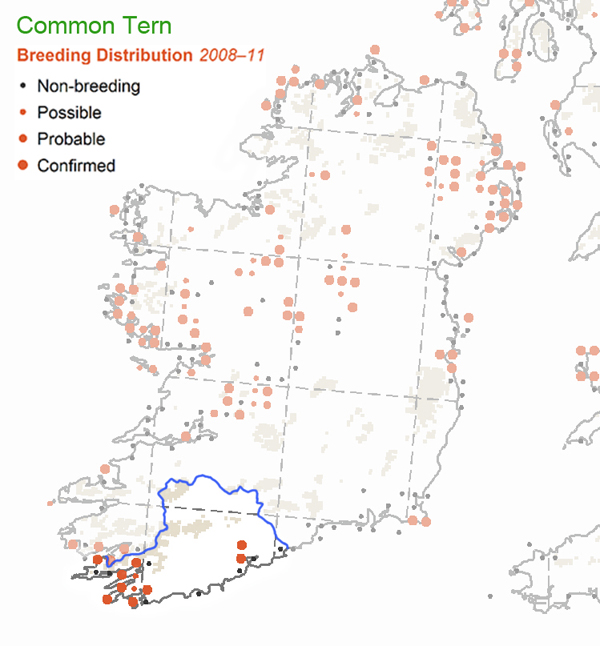 Very scarce passage migrant, with most records from late summer.
Not known to breed, although it has done so in the past.

Uncommon passage migrant and summer visitor, with a bias in records towards the south-west.

Formerly bred locally but now restricted to a small number in west Cork.

Global Distribution: This species has a circumpolar range, breeding in the Arctic and subarctic regions of Europe, Asia and North America as far south as Brittany (France) and Massachusetts (U.S.A.). It is a trans equatorial migrant, and can be found wintering throughout the Southern Ocean to the edge of the Antarctic ice and the southern tips of South America and Africa (del Hoyo et al. 1996). Overall population trends are unknown. (Source: BirdLife International) 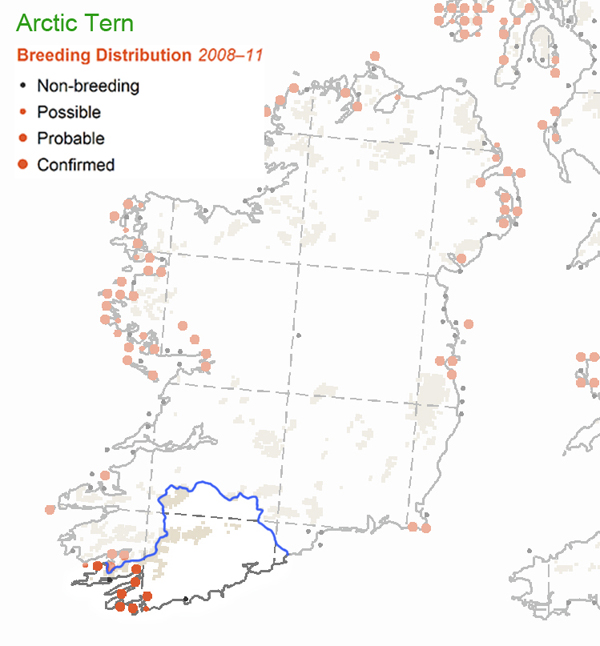